By: Caitlyn May - Updated: 4 years ago

Slay announced her resignation from the Cottage Grove City Council in mid-January after purchasing land just outside of city limits. The move made her ineligible to hold her council seat and marked the forfeiture of the only governmental leadership position in Cottage Grove to be held by a woman.

“I became a city councilor by accident,” Slay said, fresh from signing closing papers and moving one of the first truckloads to her new property. “(Mayor) Jeff (Gowing) asked me and told me about the position being open. I submitted my application based on the fact that I didn’t think I’d be selected,” she said. “The other applicants were notable business leaders so I thought I could submit my application, not get picked and Jeff would be happy.”

But Slay was selected. She landed on the committee to redesign the community pool and served as one of the councilors to lead interviews to fill empty positions on the forestry board. She lent her efforts to the local police department, kick-starting an annual event—Kickin’ it with the Cops—allowing community members to engage with local law enforcement and piped up on issues from crosswalk requests and missing shopping carts to construction projects and the housing crisis.

The application for Slay’s seat closed on March 5 and at noon, the city had only one applicant. A man.

“He’s a voice the council doesn’t have either though. He’s has a young family. There’s only seven seats and a lot of voices,” Cottage Grove City Manager Richard Meyers said.

The absence of women in government is a nationwide trend with women occupying fewer elected positions than men from Congress to state houses to governorships, mayors' offices and city councils. According to Represent Women—a group dedicated to advancing institutional reforms that enable women to run for public office— in 2017, women made up 20 percent of mayors in cities with populations over 30,000, 24 percent of state offices, 19 percent of the House and 22 percent of the Senate. But in Cottage Grove, the absence of women in leadership roles extends beyond elected positions. Currently, the mayor and city council are comprised entirely of men but so are the positions of police and fire chief, city manager, chamber of commerce director, school board president, acting superintendent and nearly every department head in the city other than finance which is headed by Roberta Likens. According to Meyers, the city has just hired two women; one in the planning department and one in the water treatment plant. Two women sit on the planning commission and according to Meyers, the current lack of women may just be a fad.

“It’s hard when you have people who have been here for 40 years and they haven’t retired but when they start leaving, we can hire people on and the city staff is becoming more diverse,” he said.

In 1993, the city council had two women on the board and a woman in the mayor’s chair. But the number of women in leadership positions in the city has always fallen short of the number of men and has traditionally been concentrated in the education and non-profit fields.

“We have amazing women leaders in this community,” Meyers said. “Why they’re not volunteering on the city council, I don’t know. I know they’re phenomenal in the positions they’re in now and would hate to rob one for the other,” he said. “We were one of the first cities in the state with a woman mayor so yeah, I don’t know why.” 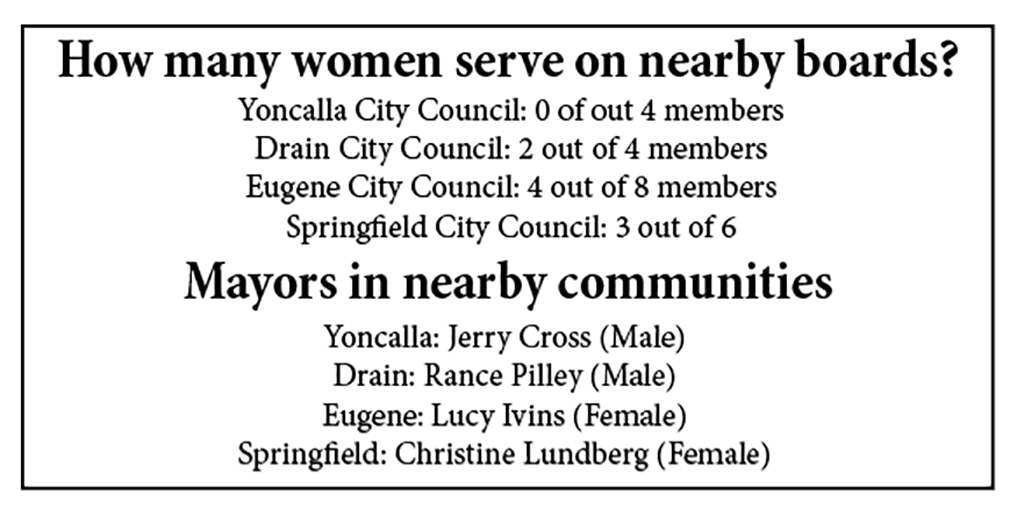 Neither does Dr. Krista Parent. “Yeah, I wonder what it is. Why?” Parent asked in regards to why women don’t seem to rise to leadership positions within the city. Just prior to Slay’s resignation, the South Lane School Board announced Parent’s retirement from the district and her position as superintendent—a title she had held for nearly two decades, well beyond the average district stay for a superintendent regardless of gender.

Kyle Tucker was named as the acting superintendent through June 30 of this year.

In researching her dissertation, Parent focused on the limited number of female superintendents and the obstacles they faced.

“75 percent of the teaching workforce, K-12, are women. So, why the disproportionate number of female superintendents? You would think that teaching workforce would serve as a pipeline to that position,” she said. “There’s got to be something there on why women aren’t running or occupying those positions.”

According to Dr. Barbara Spencer, chair for the Oregon Commission for Women, several factors contribute to the lack of women in these roles including time and finances.

“There is a confidence gap with women in running the rigors of campaigning,” she said. “Asking for money, it’s something women often do not like to do. Until they’re pushed and asked that they should run, they don’t do it.”

Cottage Grove city councilor is a volunteer position with a relatively large time commitment. Councilors attend state-wide meetings such as League of Cities conferences and serve on subcommittees in addition to the two scheduled council meetings a month.

As superintendent, Parent routinely worked 70-hour weeks partly to keep up with the demands of the position and partly, she said, to make sure she was prepared in ways she felt her male colleagues did not have to be.

“Traditionally in school districts males will handle budgets, athletics, transportation and facilities. I felt like I had to know more than a man would about these things because school boards in general, I found when studying this, will challenge a female superintendent in these areas,” she said. “I felt I had to prove myself. I had to be better and work harder to be seen as a competent person in my position.”

Parent now teaches budget intricacies at the university level but when she started in administration in South Lane as athletic director and vice principal at Cottage Grove High School, she faced challenges.

“My first statewide meeting for athletics, I thought I was in the wrong room,” she said, noting that  the space was full of men. “I attributed it to it being the field of athletics. There was a sense that you had to be really good to be in that position as a woman.”

Prior to her promotion to superintendent, Parent worked under the last female superintendent who left the district in the mid-90s and had stayed in the position for just over a year. In the 33 years Parent had worked in the district, Cottage Grove High School has had one female principal. However, all five of the city's elementary schools are headed by women principals.

“I think that’s where you see it,” Slay said of women leaders in local schools. “I didn’t realize, until you brought it up, that there weren’t more women leaders in Cottage Grove,” she said. “I know a lot of volunteers that have spearheaded projects, who are women. Projects are being completed because of women.”

While the executive director of the Cottage Grove Chamber of Commerce is a man, the president of the board is female. A woman also heads the city’s only public transportation service, a non-profit organization dubbed South Lane Wheels.

So, why are women volunteering for organizations but not to serve in governmental positions?

Aside from the financial commitment, it may boil down to representation.

“If you don’t see women up there, you often don’t think of running yourself so it perpetuates itself,” Spencer said. “It’s hard to develop the idea of ‘I want to be a mayor’ on your own.”

Statewide organizations such as Emerge Oregon and Vote Run Lead help women navigate the obstacles between them and undertaking a campaign but rural areas may have a slower start than their metro counterparts in name recognition for these groups or access to more localized organizations with the same goal.

Cottage Grove does not have a regular women’s group within city limits.

“That probably says something,” Spencer said adding that the lack of women in management positions was also not surprising. “Men pick the people they feel more comfortable with and unless it is very much involved in diversity and equity this is what tends to keep happening with organizations and cities,” she said.

According to Meyers, the city is eager to include women in the conversations, a sentiment shared by Slay who said her voice was always welcome.

“It’s not only the right thing to say, it’s actually what’s happening, it’s actually true,” Meyers said, noting that the city has had 10 women on the city council dating back to 1996.

“I think it sends a bad message to young women,” Parent said, reflecting on her experience as an educator in a district situated in a city without women leaders in government. “A city’s leadership should mirror the community. This tells young women, you can’t be leaders.”

But if the lack of women leaders is supposed to send a message of exclusion to young women, Chelsea Armstrong hasn’t received it.

She serves on the Cottage Grove Youth Advisory Council, a program aimed at engaging young people in the legislative process. Members attend city council meetings, vote with the council and host their own meetings where they map out their approach to issues in Cottage Grove and the state as a whole.

When she heard of Slay’s resignation, the 18-year-old contemplated throwing her hat in the ring.

“The only reason I didn’t,” she said, “is because I’m leaving for college in the fall.”

She’ll be studying political science with the hopes of finding a position in local or state government in the future but she’ll also be leaving Cottage Grove, a city whose culture, she said, could contribute to the lack of women on the city council and local leadership positions and a community that may not hold opportunity for her.

“I feel like one reason there’s a lack of women leaders in Cottage Grove is that Cottage Grove is old fashioned in the way it does things. In the past, men have taken on that leadership role and so getting women to take charge is pushing both sides. It’s getting women to recognize that they can take those roles and run and it’s asking men to recognize that too,” she said. “Not seeing women leadership in the city, it’s a little like, ‘What’s actually here for me if I stay?’” 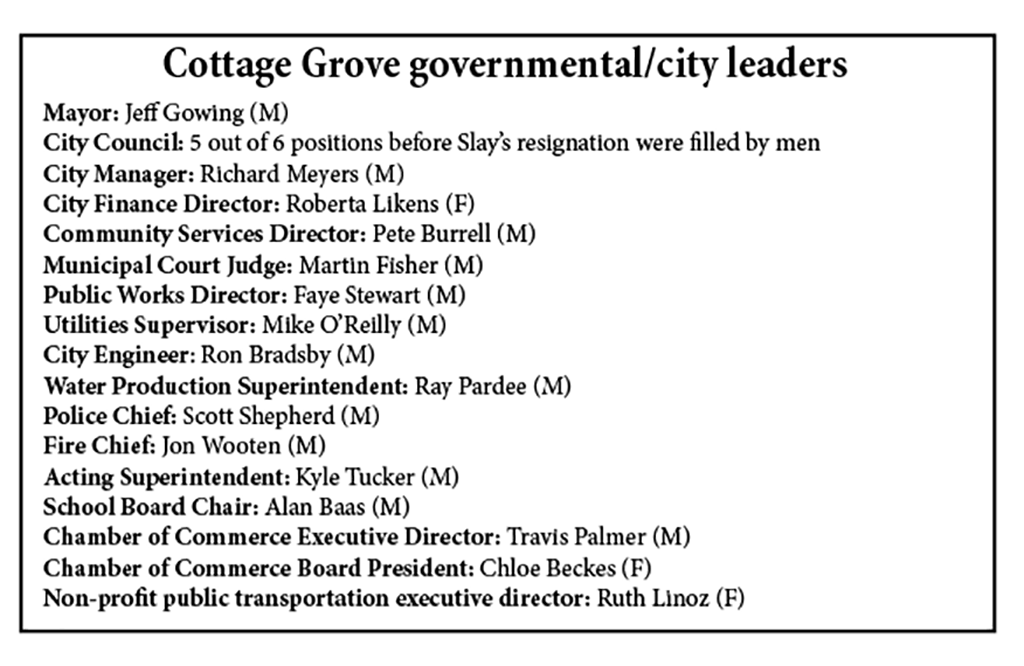