By: Gerald Santana for The Sentinel - Updated: 1 month ago

December 15 - By-and-by — some time long it was — there was the story of Opal Whiteley, one of earth's most enigmatic manifestations who spent most of her early life exploring the magical forests and logging camps in Dorena, Ore. She would go on to draft engaging letters and speeches with astonishing observations into the human condition and the natural world and teach her findings to anyone within earshot, whether a group of children or a crowd of hundreds.

Her legend is deeply detailed in the literary world. It started with a diary, written on scraps of recycled paper in 1904. Opal was only six, but by 12 years old, her sister had torn the diary fragments into shreds in a fit of rage. It was kept in a hatbox for years and later reassembled, published in 1920. “The Story of Opal: The Journal of an Understanding Heart” has since been examined and re-examined for clues about her life by researchers, scholars, authors and artists.

Enlightening articles, pictures and handwritten letters written to and by Opal have been collected and treasured, with each artifact hoping to provide hints to solve the mystery of who Whiteley really was. Her identity is at the heart of the riddle which has kept people guessing for years. And her heart was in the wilderness of rural Cottage Grove where impressions were shaped by Angel Mother and polished by Angel Father, two heavenly characters she wrote about in her diary.

Never before had the world experienced the innermost thoughts of a child in such a precocious, earnest and intellectual manner. Historians can now trace her earliest newspaper appearance in print to June 29, 1907. Whiteley is one of three girls listed in a Fourth of July float sponsored by the Commercial Club Ladies Committee. The following week, her name is reported again by both the Cottage Grove Leader and the Bohemia Nugget as “Miss Opal Whitely.”

Representing the Hawaiian Islands, Opal Whiteley and Eunice Van Denburg, in costume, are reported to have “won the admiration of the crowd as they passed” according to the Leader. The float was themed “The Liberty Car,” with others dressed as The Goddess of Liberty, Plenty and Peace and Columbia. “for a galaxy of loveliness was not surpassed in the United States.” was sentimentally noted.

In an article from the Leader from October later that year, Whiteley is reported to have given a recitation of “Two offerings” at a large gathering at the Loyal Temperance Church for an afternoon program called “Harvest Home,” put on mainly by children. It’s perhaps the earliest oral recital ever recorded. Whiteley was a gifted child with photographic memory that was known to memorize full pages of bible scriptures.

Perhaps the recital she gave was for the two offerings in Genesis 4, the story of Cain and Abel or her own insight and original work. The rediscovered article in the newspaper suggests that Whiteley was already comfortable speaking in front of crowds at ten years old. She would devour books with a limitless thirst for knowledge of the natural world, she seemed to hold the keys to the inner workings of life.

Returning to the papers after a four year absence, on May 23, 1911, Opal Whiteley was recognized on a list of pupils in South Lane who were successful in their eighth grade examination. She made the class roll and the event was held at the Cottage Grove Armory on the 26th, the class motto was “Not to the top, but climbing.” encouraging words for the 32 students recognized.

In June 1912, Whiteley returned to the Armory, this time to deliver a patriotic song by Wilbur D. Nesbit titled “Your Flag and My Flag.” The short Memorial Day program included a day of “beautiful and appropriate exercises,” including a drum corps and marching through Main Street that eventually carried over into “the presence of a great throng of citizens and school children.” The program at the Armory began with a recitation of the Gettysburg Address and continued with songs and hymns.

News items coming into the Cottage Grove Sentinel from the Golden Star mine in the Bohemia Mountains, where Opal lived in 1912, were covered under “Star Twinkles.” On Nov. 13, it was reported that the mining camp had a “candy pull” where children played games at the home of Bud Allen. Whiteley is listed with her sister Pearl as attending the party.

Camps were familiar shelters for Whiteley growing up, as her family moved from mill to mill, up and down the Row River Valley. The Golden Star mines were originally sold from the Pearson Brothers to Patrick Jennings and his brother James in 1895. Opal Whiteley’s uncle, Henry Pearson, would come back to see her and the family from time to time at the Star mine while he traveled throughout the West. Pearson was an early pioneer and intellectual that mentored Opal and is seen by some as inspiration for the character of the “Angel Father'' in her diary.

Every good story must have balance; if Pearson was the inspiration for the Angel Father, who was the Angel Mother? Opal, without a doubt, was raised by the Whiteley’s. However, in her diary, published in 1920, she strips reality into shreds by stating in the preface of the book that as she put her diary back together again, she remembered that her loving parents died and were suddenly placed first with an older woman then, the Whiteley’s, who replaced a daughter that they lost prior to the “new” Opal’s arrival.

Oregon state librarian Cornelia Marvin “early noted the child's inclination for natural history and kindred subjects and through several years carried an extensive correspondence with Opal, in which she suggested books to read and study and directed her literary endeavors in general,” according to a Nov. 1920 article in the Oregon Statesman.

For Whiteley herself describes the early tendency of her mind and effort. The first is dated Dorena, Jan. 6, 1913: “Dear Miss Marvin, I appreciate the little book about the publications of the United States Geological Survey which you sent me. I wrote to Mr. Hawlley for a number of these publications, which I received about three weeks ago.”

Optimism and an unwavering dedicated cycle to learning and teaching mixed with curiosity were a staple in Whiteley’s world. And it was Corvina Marvin, the supplier of books that she suggested, which would help Whiteley shape the definitions of the fairyland around her. It is a strong possibility that Marvina is the woman Opal refers to as her Angel Mother in her diary. At least a part of her, the soft, intellectual side.

Researching Opal’s history can be exhausting because her ambition rubs off, and once the researcher is consumed in her world, they want to research like her. Whiteley continues from her letter to Marvin, “I desire to take up as my life work the training and teaching of children. I want to also, to teach them about the beauty of God's outdoors, of the birds, trees, flowers. Of insects, shells and rocks. I want to help them to be a blessing to the world, to make the hearts of their parents glad and to grow into a noble pure manhood and womanhood.”

Little Miss Opal was coming into her own as an intellectual and a minister. Guidance was presumed to have come from Lizzie Whiteley, her assumed biological mother, but in the legendary diary, her mother was painted as an abusive adopted parent named “the Mama.” Abuse was later denied by relatives. But Opal’s grandmother, Achsah Pearson, revealed in an April 1920 interview, that “Lizzie would spank her or switch her, or if Lizzie wasn’t feeling up to it, I would.”

Every eager request Opal made to Marvin, seems to resonate brightly, “Would you please send me a list of books with illustrations about flowers and about birds?” Whiteley asked

“Also other nature books? And would you please tell me what the postage or expenses on these books would be? I desire to write for other people the lessons I have learned from little children and of the great things I have gained from God's outdoors, and to write for little children. Could you tell me of two or three good books on this subject which would be well for a beginner to study?” If Opal had a distant Angel Mother, Marvin could possibly make the most sense.

Now on Whiteley’s 125th birthday, this Dec. 11, The Sentinel had an opportunity to speak with Steve Williamson, founder of the Opal Whiteley Memorial in Cottage Grove in 1994 and is a local historian in Whiteley’s lore. While he spoke at length about rediscovered artifacts recently found through the online newspaper archives, he declined to comment to our readers at this time.

So many expressions of joy and appreciation for life in Whiteley’s work are common. Receiving those books from Marvin in 1913 undoubtedly made an everlasting impression on her, which echoed through her books and then, the world. “I have a great many child friends and I keep their sayings and little stories of their daily life in notebooks for future reference. I have found this very helpful.” Whitely wrote. “I would appreciate the favors in lists of books etc very much and would take the best of care of the books.”

People can learn more about her life and writings from the Opal Whiteley Memorial, www.facebook.com/opal.whiteley/ and opalnet.org. 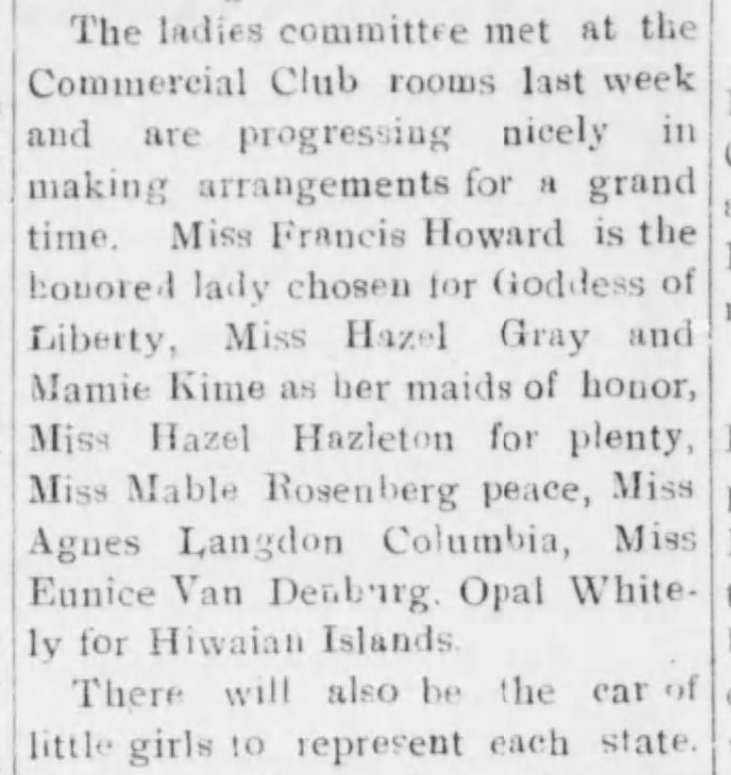 Back to School Brigade